With all the discussion lately about BS I'm rather intrigued with breech-seating PBB. That along with the fact that I have a Ruger No.1 that just will not reliably shoot good groups with cast bullets and yet shoots several JB loads at under an inch for 5 shots at 100 yards.

I've two different bullets ready to test. A modified RCBS 25-120-SP with the GC shank milled off the mold to make a PBB and a 97 gr. NEI GC bullet, without a GC seated. I've two loads, both with Unique, 9 and 10 grains. I have a method to breech seat with the use of two cases with brass rods and a tool to seat the case thus seating the bullet to about .060" beyond the case mouth or 2.554" from the face of the breech block. I've 25 cases charged with each charge plugged with floral foam. For a control I will also shoot 2 5 shot groups with fixed ammo, same load combinations.

My hope is that I can first make breech seating of a varmint style production rifle consistent enough to score nines or better on the CBA target. I should also learn if either bullet or load charge weight works. I'll be cleaning the bore with a dry patch between each 5 shot group and shoot one or two fouling shots to be decided before each group. The GC version of the RCBS bullet has shown promise at 50 yards before. The 97 gr bullets were weight sorted by .1grain. With the number I'll be shooting all will be within .3 grain, the RCBS bullet was not weight sorted. The charges were weighed to +/- .1 grain although they were thrown charges. Some throws were outside of the tenth of a grain and were returned to the hopper.

All testing will be 5 shot groups at 100 yards. The results hopefully will be interesting, however the sample size is too small to reach any conclusions. I will at least be able to either rule out these combinations or find something worth further testing. I do know that to be competitive in the PBB class I will need a load combination that places better than 90% in the ten ring with frequent x hits. No I'm not holding my breath.

Can you give some more detail on your shop made seater. I too own a couple of Ruger No. 1s.

At the range, 100yds, Benchrest, I was able to get respectable accuracy, sometime 4 shots in less than 1/2" then one would go 3" high to the right, I shot 60 rounds and ran out of ammo, I have since bought the NOE 86 gr PB bullet to try for Breech Seating

I use a case, with a sliding insert attached to a 10-32 button head cap screw, and I use a brass rod and hammer to seat the bullet, pictures if I get time I'm not sure of the twist. I'll check and get back to you.

Can you give some more detail on your shop made seater. I too own a couple of Ruger No. 1s.

Sure Jim. I took a few pictures. I'm not sure of the materials involved as it was one of those things I inherited. It looks to me that if you had a surplus 1903-A3 bolt body you could cut it up, add a few parts and make one. I've had to replace a part of mine once and used a piece cut from a junk circ sawblade.

It seems the forum software does not play will with direct uploading from an iPhone, image size is too big. Other forum software packages have a feature that will resize images upon upload. I'll try to get around to resizing the images to share here. If you want them sooner drop me a PM with your email addy and I'll send them directly from my phone.

I've resized my images and uploaded them to my own server. Rather than derailing this thread I'll post a new one with the details. 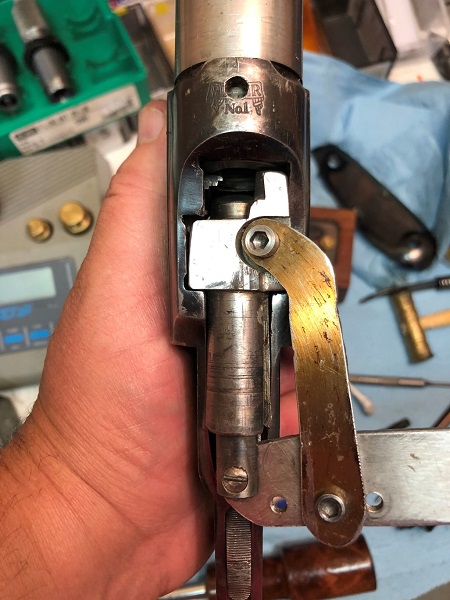 After a  couple of frustrating range sessions I'm no closer to finding a solution to my .25-06.

All groups were terrible however the wind was not cooperative.

Started with one wet patch of Hoppies followed by a number of dry patches. That followed by 10 shots. Two dry patches and then two fouling shots. I think they missed the paper. 4 of the next 5 shots made a large "group" not sure where the first shot went as it was not in the group. This was with the light load and bullet and fixed ammo to have a baseline. Each 5 shot group followed the same result, two fouling shots didn't seem to be enough. 4 out of 5 shouts would "group" but not enough to be worthwhile for anything other than coyote control at under 100 yards. Into the fourth group my rifle started to malfunction, the overtravel adjustment was set to tight and the sear was not allowing the hammer to move. heard and felt a real faint click then finally the hammer drops and bang. This happened twice with the rifle loaded and a bunch of times while dry firing to try to figure out the problem at the range.

After the first session I decided that cleaning the bore after each group was not worth it and seemed to make it worse. With the number of fouling shots required I'm not sure I would have enough time in a match to fire all the required shots. I'm assuming that no match director would allow me to use fixed ammo for sighters and breech seating for record shots, although since breech seating is authorized it is not required so maybe that wouldn't be an issue. Still with the time needed to breech seat using what I  have assembled 7 shots in 10 minutes might not happen. So the second half of my testing was without cleaning between strings.

Range session two was nearly a waste of time. With a 15-20 mph wind with gusts. All groups were so large that I just used it as a bench technique practice session. It was only after I was done and back home that it dawned on me that the shooting bench conditions might have greatly contributed to the poor results achieved. The benches are plywood covered in a 3/4" horse stall mat material. My front rest having pointed feet can move a good bit without much to disturb it. Funny how I've not given it any thought until today. Yesterday I was shooting my .35 Whelen in strong gusty winds and had groups about 2" but was firmly holding the rifle, same with my No.3 7mm-08 which shot even better groups and is real light in weight, a pure joy to carry in the field.

This testing might be continued sometime in the future but since the groups were more than twice as large as my .30BR groups today and the PBB class is so competive it really seems like a waste of time and effort. In addition floral foam doesn't make a good enough plug in a bottle necked case that has to be transported to the range, even at 3/8" thick. Most fell into the case past the neck. My drive to any match is much farther than my drive to the local range. Large case small powder charge means this might not be an issue.